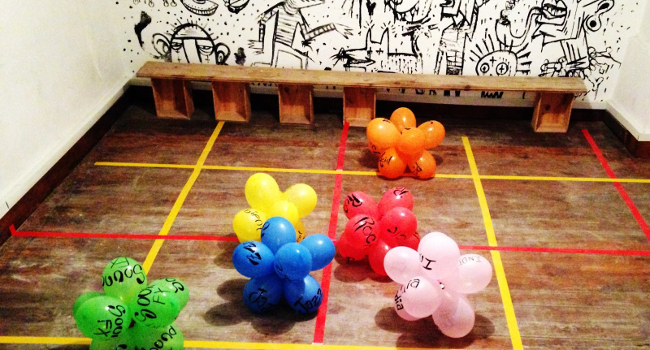 Abstract: Music plays a crucial role in social interactions. This thesis examines how an interactive environment might facilitate such exchanges by developing and evaluating a novel system for joint music consumption by a group of users in the same place and time. The system provides a platform for the creation of spatial interactive music. It uses relative locations measured using a Bluetooth signal, and generates an immersive personalized augmented musical environment that depends on the location of its participants. I conducted two experiments testing the system within the context of a silent disco party, using the system's relative position signals as well as video tracking to evaluate the experience of users with and without prior acquaintance. The results showed that for both groups, the system promoted openness and increased the social interaction between users.

In addition to the thesis I published an extended abstract in the proceedings of HCI International 2013, and presented a poster in the conference posters session:

I also gave an oral presentation of my research at ISTAS'13.

This demo shows how movement of participants in space affects the music they hear through their own Android device and headphones using the system in a silent disco party. In addition it demonstrate the influence of different participants on one another when one virtual participant takes diverse sound zones with him during this simulation. The music is the same as in the original system.

Crucial part of the analysis of experiment #2. More info on the way...